I had a requirement to run MySQL on a VSTS hosted build agent and then to be able to run commands from outside of the container and this gave me the chance to have a play around with VSTS support for containers and builds as YAML (YAML builds / builds as YAML??).

I struggled getting started with this for a little bit longer than I would have hoped, if you have a container and want to run commands inside the container then the process is pretty straight forward, although on vsts you don't get a TTY so need to do “docker exec -i” rather than “docker exec -it” as all the examples show. For this, I specifically wanted to run a command on the host and have MySQL exposed externally to the container which is the bit I struggled with the longest.

If you want to play along at home you can setup a build in VSTS that points to this repo or you can push the repo to your VSTS account directly:

I have broken the process up into 4 main sections.

Step 1 - installing mysql-client on the host

This is using the hosted build agents so we make sure the mysql client tools are installed and available.

The next thing I do is to start a container with MySQL, I started using the built in “Run a docker command” task but ended up putting it in a shell script as I wanted to start it then run some additional stuff. If this wasn't a public repo and I would have needed credentials to run this then I would have probably have used the official task as it handles credentials for you.

Things to note are:

Once that all completes then we are ready for the next step which is to run a command from outside the container. In the previous step, I set a vsts variable called destinationIp so in the later steps I can run this script:

$2 resolves to the ip address of the container and $1 the script file to run.

The name of the script I can pass in and the MySQLIp is set by step 2 and is a VSTS variable so I don't need to do docker ps --all and try and figure out which container is mine.

The first script I run does a “CREATE DATABASE DeployTest”.

The last step, for this demo, is to check that the create database call worked using a show databases;

If everything goes smoothly you should end up with something that looks like: 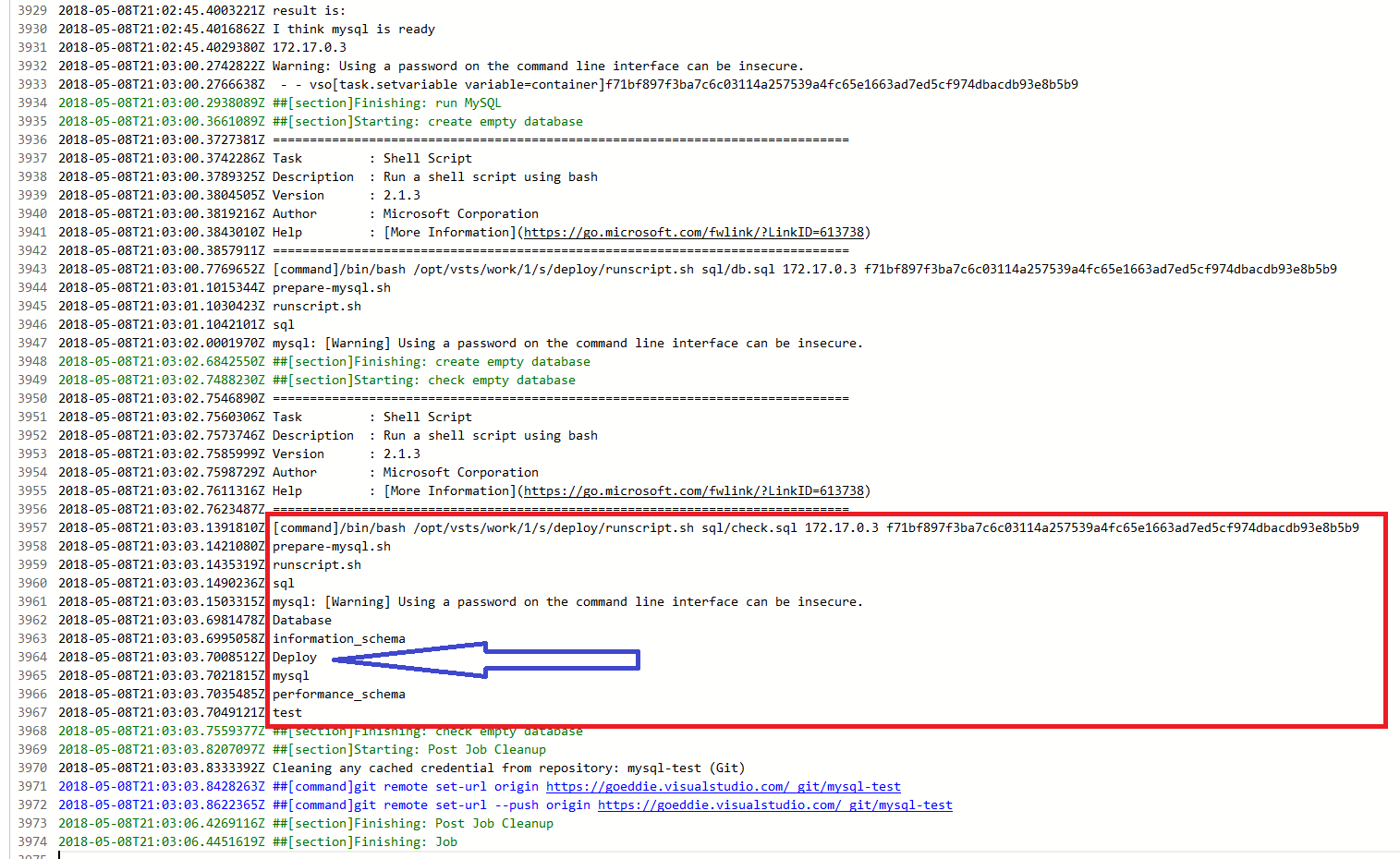 This won't get everyone excited, most people can run everything inside the container and life is sweet but in this case I needed to connect to the container from the vsts host, I also had fun with writing a build in a YAML file, the future is here :)